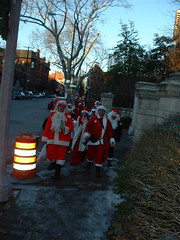 Saturday's St. Louis Santarchy event was a huge improvement over last year's. It actually captured the sense of what Santarchy means to me, and that's this: That there is a tremendous reservoir of public "good will" invested in the stock characters who inhabit a typical mall Santa's Workshop interactive theater event, and that if not over-exploited, if used somewhat gently, there is great fun to be had from exploiting that reservoir of good will. That behavior that the public, especially here in the conservative and hyper-polite midwest, would be alarmed or disgusted or angered by goes back to its prior state of good natured tolerance for people "just having some fun" if it's done by people dressed up like Santa Claus and his helpers. It rewards the public for their tolerance with some silly theater, some entertainment to talk about over dinner. It rewards the participants with the frisson of "getting away with something."

On paper, the itinerary for St. Louis Santarchy 2006 looks quite a bit like last year's somewhat boring event. Ostensibly, it's just a pub crawl, spiced up with a couple of very brief public appearances. To casual inspection, it looks like nothing any more radical, transgressive, or entertaining than just hanging out in a bar while wearing silly clothes. To some people, especially those raised with middle class (and working class aspiring to be middle class) values of conformism and hyper-politeness, that may seem transgressive enough, but come on. What on earth could be more mundane, more quotidian, than being mildly drunk and looking moderately ridiculous while inside a bar?

So how did St. Louis Santarchy 2006 escape this pit of mundanity? Well, what isn't obvious from looking at that schedule, unless you start to map it out, is just how much ground is covered between stops. That route includes three long hikes through busy neighborhoods of at least a half a mile each. That route also includes a "short-cut" between a light rail stop and a bar that "just happens" to take it the whole length of one of the only truly busy shopping malls in St. Louis this year during peak hours for Christmas shopping. It also included all-but commandeering, to the point where we made up over 90% of the passengers on, two whole train cars each time for three times, and an entire city bus twice. And to me, the real Santarchy Christmas magic wasn't inside the bars. I'm not saying we should have skipped the bars; frequent breaks to stay lightly liquored up (and fed for free at quite a few of those bars, whose owners are also truly into the Santarchy spirit and who don't want to see twenty to forty drunken Santas falling down and hurting themselves or puking in the corners) were essential to provide us with the fuel that powered our progress through the whole width of St. Louis's central corridor. But virtually every man jack and peeing bitch of us probably has at least one story of delight from the hikes and the transit routes, and I all but guarantee you that so do the people who crossed our paths. (Whereas inside the bars we mostly stayed to ourselves, and were mostly ignored by the other patrons. Unsurprisingly.)

Let me give you a few examples. We all hiked at what speed we could manage, which meant that some of us who don't do a lot of distance walking had a tendency to fall farther and farther behind. On the long hike from the northeastern corner of the Central West End to the southwestern corner of it, by halfway there our little sidewalk parade probably stretched for a little under three blocks worth of continuous Santarchy, with each and every little cluster of Santas doing their own shtick for the pedestrians and the people in the shops. At two points, when it was threatening to spread out even farther because one of the trailing groups just barely managed to miss a pedestrian cross walk, I just spontaneously stopped in traffic in full Santa suit, assumed the clichéd 1940s traffic cop stance, and held up traffic for people to cross. Most of them were scared to do so the first time, but what they didn't notice is that when it's Santa holding up traffic for other Santas, drivers honestly showed no sign of minding. There was not one honked horn, nor one angry face; that 30 or 40 second delay seemed to me to actually amuse and delight the drivers. Obviously that's not something that just any pub crawl could get away with, and none of us would want to live in a city where it happened more than once a year. But once a year, when done in a way that's funny enough? Then it's pure Christmas magic.

Earlier in the day,

becka_kitty and I got a couple of blocks out ahead of the main parade because she wanted to stop at one of the shops in the Delmar Loop and buy a "Mistle-Toad" stuffed figure that they had hanging in the shop window. So on our way to the Delmar train station, we ran across a cluster of four of the typical retro-punk-rocker teenagers in their Hot Topic faux punk gear and brightly colored mohawks, out for a warm December afternoon stroll of menacing the public. Becka and I, costumed as Mr. and Mrs. Claus, visibly threw them off of their act, as they were subtly but perceptibly weirded out to be passed on the sidewalk by Santa and were struggling to maintain their mandatory-uniform angry teen sneers. She and I almost stopped to watch, because we could just imagine what was going to happen to them in a minute or so when they got farther up the street and found themselves having to pass through a swarm of 20 more Santas, and I heard later from people that yeah, they just freaked gently out over it. You can't buy entertainment like that.

I said a while back that as I've grown older (and the world has grown more nervous) it's become less fun to "freak the mundanes" because mundanes have gotten much more hostile when freaked. A good Santarchy brings back some of the flavor of the fun that used to be able to be had by getting 20 to 50 people together in costumes to go out in public and disorient people who weren't expecting it, and I reveled in it all day and much of the night Saturday.
Collapse